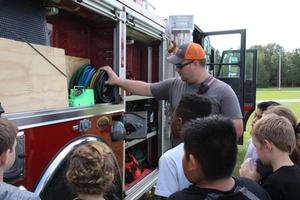 Members of the B-L Fire Department recently visited several of Lexington Three’s schools in an effort to educate students about the causes, dangers and prevention of fire.

Students in grades K4 and K5 viewed a puppet show and received a show-and-tell tour of one of the department’s fire trucks.  Students in the 2nd and 4th grades enjoyed an hour-long assembly and 1st, 3rd and 5th graders had the opportunity to walk through the station’s Fire Safety House.


The puppet show and assemblies discussed rules such as knowing how to “stop, drop and roll” and the importance of not playing with things like lighters and matches.  Firefighters also demonstrated some of the tools that they use while on the job and even got dressed in their Personal Protection Equipment (PPE) or bunker gear, as it is sometimes called.  Several children were also allowed to try on a few pieces of the uniform.


Students who were able to walk through the Fire Safety House learned about the importance of practicing fire drills at home, knowing two ways out of every room and establishing a meeting place for the family outside of the home in the event of a fire.  Firefighters also talked to students about calling 911 and knowing what questions the dispatcher might ask them in the event of an emergency. Fire Chief Jay Hendrix said that with the prevalence of cell phones and the decline of home landline phones nowadays, it’s as important as ever that children know their home address so that they can give it to the 911 operator.  That’s because unlike home phone lines, cell phones do not provide dispatch services with the location of the caller.


In addition, students who toured the Fire Safety House learned about cooking safety (turning pot handles inward, keeping younger siblings away from a hot stove, not using metal in the microwave) and why it’s important to sleep with their bedroom doors shut (doing so will prevent smoke from getting into the room if there is a fire).  Firefighters also talked with kids about the importance of having working smoke alarms, what to do if they are trapped in their room (block the smoke from getting in under the door with sheets or blankets) and remembering their second exit plan. “I always encourage the kids if they can’t climb out safely to throw toys and clothes out the window to give us one more visual clue that they are trapped.  When we do our 360 walk around we might miss them if they move from the window, but we will see the toys and clothes and can rescue them,” said Chief Hendrix.


Chief Hendrix hopes to expand the fire safety message to other schools in Lexington Three in the coming years.