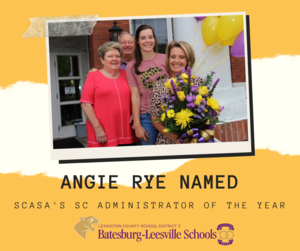 Lexington County School District Three is thrilled to announce that Mrs. Angie Rye, Chief Academic Officer for Lexington Three, has been named as the recipient of the 2020-2021 SCASA Administrator of the Year Award!


This statewide award is presented annually to an associate or assistant superintendent, a director, coordinator or other professional personnel at the district level. The award recognizes involvement with regional or statewide SCASA (SC Association of School Administrators) educational issues and the nominee's impact on improvement in his or her school district.


"Under Mrs. Rye's leadership, our district has made sustained, incremental progress by implementing a variety of carefully selected instructional programs and strategies with fidelity.  Unquestionably, the greatest consequence of Mrs. Rye's vision and labor is the increased level of confidence our educators exhibit and the increased level of pride our students, teachers, and staff have in themselves.  She is most deserving of this prestigious award," said Lexington Three Interim Superintendent Dr. Stephen Hefner.


Mrs. Rye has worked in the educational realm since 1993 when she began her career as a seventh grade Earth Science teacher.  In 1998 she moved into administration, becoming the Assistant Principal for Instruction and then Principal of Sandhills Middle School before becoming the Director of Pupil Services in Lexington School District Four.  In 2008, she joined Lexington Three as the Principal of Batesburg-Leesville Middle School and in 2013 was named Chief Academic Officer for the district.


Upon becoming the Chief Academic Officer, Mrs. Rye laid out a vision for the elevation of the district’s instructional program.  She has provided steady, consistent leadership by implementing a variety of programs and strategies such as Personalized Learning, AVID, Montessori, 1:1 Computing, eLearning, dual credit, early college, and partnerships with neighboring districts for shared course offerings and professional development.


Mrs. Rye becomes the second person in Lexington Three this year to receive a state SCASA award.  Mrs. Sonya Bryant, Principal of Batesburg-Leesville High School, was named as SCASA’s Principal of the Year back in December.