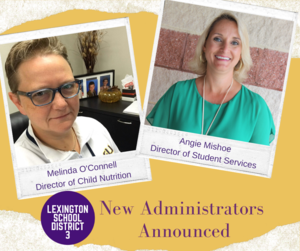 
Mrs. Mishoe holds a Bachelor's degree from Winthrop University in Special Education and has two Master’s degrees--one in Educational Leadership from USC and one in Sports Administration from U.S. Sports Academy.  Mrs. Mishoe says she loves the supportive, family-like environment that encompasses Lexington Three and values the district’s approach to making every student’s needs a top priority.


She and her husband, Tommy, have two children--Marshall and Jordan.  They reside in Lexington.


Melinda has been working in school nutrition for the past 13 years.  Previously, she worked in Richland School District Two with the nutrition program. Her passion for the food service industry runs deep. Growing up in New Orleans, Melinda was exposed to the restaurant industry at a young age. Both her grandparents and parents owned restaurants and the family worked in them regularly. She brings this love for feeding people and now, especially children, to her new role.

Melinda has a Bachelor of Science degree in Elementary Education from Western Governors University. She is also a veteran of the US Coast Guard and remains actively involved in the Coast Guard Auxiliary.

In her free time, Melinda enjoys gardening, reading, volunteering and spending time with her four sons--Aidan (15), Paxton (11), Kellan (9), and Lawson (4).

Melinda lives in Lexington near the Pelion line.