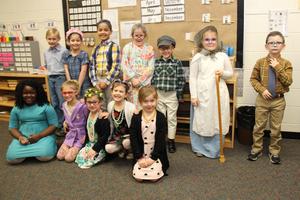 Wednesday, January 29th marked the 100th day of school for students in Lexington County School District Three.  While this day is typically observed during a regular school year, it was especially commemorative this year as the district is celebrating its centennial birthday.  Hence, staff and students at all four of the Batesburg-Leesville schools took the theme “The 100th Day of the 100th Year” and ran with it, with students in grades K4 through twelfth participating in a wide variety of special school-sponsored activities.


At B-L Primary School, staff and students could dress up like they were 100 years old or in some of the fashion trends from the 1920s such as drop-waist dresses, flapper-style outfits, and sports knickers.  Students and staff also participated in a school-wide read aloud of the book My Great-Aunt Arizona by Gloria Houston, which recounts the impact of a teacher in a one-room schoolhouse who helped generations of students achieve their dreams. Teachers also had students participate in special instructional lessons that were themed around the number 100.


At B-L Elementary School, faculty, staff and the student body wore purple and gold and lined up on the playground at exactly 1:00 pm to form the shape of the number 100.  Members of the district’s technology team captured the image overhead using a drone. Students at B-L Middle School took time during their Panther Period to write down thoughts for future Lexington Three students on slips of paper that will be placed in a time capsule.  The time capsule will be buried this spring on the school’s property and noted with a ground marker.


At B-L High School, staff members were strategically placed at the school’s entrances prior to the start of the school day.  The 100th student to enter the school at each of the entrances received a prize. In addition, students were encouraged to dress in 1920s-era fashions, with awards being given to the best male and female costumes.  Staff also joined in the dress-up fun, with many donning 1920s-style headpieces.