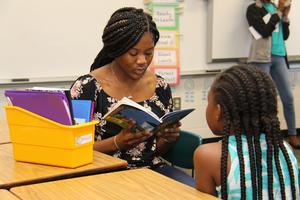 Every week at B-L High School, Assistant Principal Eric Gambrell highlights the accomplishments of one student who has demonstrated excellence through a video he produces called “Celebrating Greatness.” The featured students are selected by faculty members based upon traits such as character, leadership skills, academic performance and extracurricular involvement.  Now, thanks to a special program that’s picking up momentum this year called Big Panther, Little Panther, these accomplished high school students, alongside fellow B-L Rotary Club Students of the Month and B-L High School Students of the Month, are getting the opportunity to spread their positive attributes to the district’s youngest learners through mentoring roles.


“This is something I was a part of while I played at Charleston Southern. Every Friday, the team would split up by positions and go to local elementary schools. We were there to be a positive influence. When you know someone is looking up to you, it makes you want to do your best,” said Coach Gambrell.


Through the Big Panther, Little Panther program, these students from B-L High School travel to B-L Primary and B-L Elementary Schools several times a month.  They read to students, help them with their classwork, and serve as a friend to the children they work with in grades K4 through 5th grade.


Coach Gambrell said that he shares a poem titled “Little Eyes Upon You” with each of the high school students when they become a mentor as a reminder that while they’re working to make a difference in the lives of younger students, there are high expectations they must meet as well.


There are little eyes upon you, and they're watching night and day,

There are little ears that quickly take in every word you say.


There are little hands all eager to do all the things you do,

And a little boy who's dreaming of the day he'll be like you.

You're the little fellow's idol, you're the wisest of the wise,

In his little mind about you, no suspicions ever rise.

He believes in you devoutly, holds that all you say and do,

He will say and do in his own way when he's a grown up like you.

There's a wide-eyed little fellow who believes you're always right,

And his ears are always open and he watches day and night.

You are setting an example every day in all you do,

For the little boy who's watching to grow up and be like you.